- May 18, 2018
It sounds like the stuff of science fiction.  But it's a fact.  NASA is developing autonomous tiny drones, the size of bees.  NASA's Marsbees  will explore the planet Mars for any signs of Martian  life. The drones are cutting edge robotic innovation.  NASA views them as potentially leading the way for the eventual colonization of Mars.

Marsbees is an extraordinary, artificial intelligence (AI), drone development NASA project.  The tiny drones are shaped and sized like bees with one exception.  Their wingspan is much larger.  The wings are the size of cicada's.wings  They're designed to fly through Mars' thin atmosphere with speed, distance, agility and duration.  They handily outpace NASA's cumbersome rovers.  Rover Curiosity landed in 2012 and has only travelled 12 miles.

The drones are steered by artificial intelligence.  Like satellites, they transmit data to scientists wirelessly.  NASA plans on launching them from a mobile space base.  The base, likely a rover, will serve as a recharging and communications center.

NASA is also developing another nature inspired robotic innovation.  A hummingbird micro-air vehicle.  It too is for exploration of Mars. It's being tested in simulations of Mars' atmosphere.  NASA is currently investing in 25 early stage test projects to accelerate the exploration and eventual colonization of Mars. 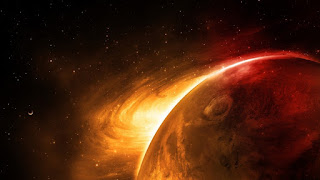