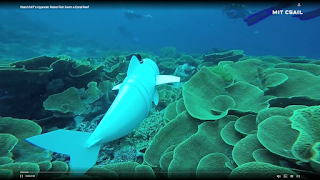 It's called SoFi, the robo fish.  SoFi is a soft robot developed by a research team at MIT's Computer Science and Artificial Intelligence Lab (CSAIL). True to MIT's robotic legacy, SoFi is highly advanced and has achieved underwater firsts.  In fact, it's considered the most advanced robot of its kind.

Swim with the Fish - SoFi the Explorer

The little robot recently swam untethered alongside of unsuspecting fish off Fiji's Rainbow Reef.  It reached depths of 50 feet for as long as 40 minutes at a time.  That's a first.  What makes this important innovation is that it's a groundbreaking new way to study marine life, up close and personal.  Equipped with cameras, Sofi can shoot footage safely in places, at close range, that humans can't get to. The swimming robot explorer opens up underwater worlds not seen. 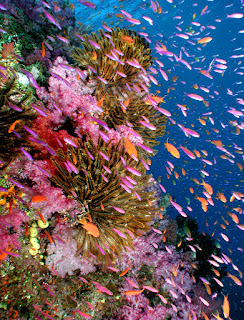 SoFi is a biomimetic bot that closely resembles a fish.  It's composed of 3D printed plastics.  A hydraulic motor moves it side to side, giving it fishlike movements.  It moves in all three directions with a pair of side fins and a buoyancy control unit.  It has a tank to control its depth.  The robot is piloted from afar by a diver.  A waterproof remote control gives the robot ultra-sonic, acoustic commands.

MIT researchers are currently upgrading SoFi's design.  They are accelerating the robot's swimming speed to further enable it to follow fish and other marine life with its cameras.