Scientists from California Institute of Technology and NASA's Jet Propulsion Lab are wishing on Aladdin's Lamp for a magic carpet ride.  Their solar energy research project involves launching 2500 "magic carpets" tightly side by side into space orbit to absorb the sun's energy.  The carpet system would beam the energy back to earth ground-stations to generate electricity. 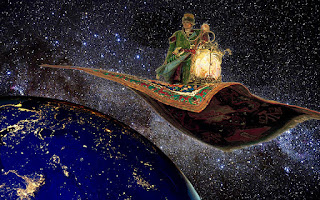 Orbiting Carpets to Light the World
The carpets will fly over an area the size of 1,670 football fields or 3.5 square miles. The carpets are only one inch thick.  They're designed to precisely beam energy back to earth to targeted locations.  Primary targets would be global areas in need of energy, particularly in the third world.  It would be the largest space structure ever built.  And the targeted beam precision is provided by technology called "phased array" and is currently used in radar systems.  The principle is controlling the timing and patterns in which each solar tile turns its antenna on.  Researchers say that enables the system to generate electromagnetic waves targeted to desired locations.

Space Solar Power Initiative
The project is formally called the Space Solar Power Initiative or SSPI.  It's being led by three California Institute of Technology Professors who also serve as research scientists at NASA's Jet Propulsion Lab.  SSPI is a partnership between Caltech and Northrup, which is providing $17.5 million to fund development of key components over three years.

Compelling Need
According to the United Nations, 25% of the world population doesn't have access to reliable electricity.  Of that number, half have no electricity at all.  The researchers believe their orbiting carpets are a solution.  They compare their emerging technology to wireless phones.  In parts of the third world, there are no telephone landlines.  Wireless networks are easier and cheaper to deploy for phone service.  Similarly in locations without power plants or transmission lines, it's easier to build ground stations and beam in energy from space.  That energy would then be converted into electricity and transmitted to local communities.   A magic carpet ride to light up the world.