Increasing food supplies is one of the world's most pressing needs.  The supply-demand equation is so dire it eventually could lead to global food fights.  By 2050, world population will increase by 34% to 9 billion. Most of it in the third world.   Food production has to increase by 70% to keep pace.  Meat production has to double to 470 million tons.

There are several important innovations that begin to address the global food shortage.  One novel idea comes from Microsoft's Bill Gates.  Go meatless.  The concept is to produce lab grown meat and meat substitutes that taste the same as the real thing.  Gates financially backed a company  Beyond Meat that produced the 1st meatless burger, made from peas.  There's an added benefit in going meatless.  25% of world emissions come from food production including meat.  Going meatless could reduce climate change.

Robots and drones operate Hands Free Hectare Farm in the UK.  It's the world's first robot farm with no human farm hands.  The robots sow, plant, fertilize and harvest their fields of barley.  The drones fly over the fields and snip crop samples for researchers to check.  Their first harvest of 5 tons of spring barley was a great success.  Robot farm is the creation of researchers at Harper-Adams University in Edgmond, UK.  The researchers believe that autonomous robotic farms achieve better crop yields than traditional ones.  Better crop yields, better soil quality, more precise distribution of fertilizer and herbicides are the promise of robotic farms.  All of which would be a start in helping to solve the world's pressing food supply needs.

Crop science is leading the charge to produce rice, grains and vegetables that are flood, drought and pest resistant.  Innovation companies like Bayer AG have ambitious research underway to address the world food supply crisis through innovation.  For details see our podcast  https://innovation-gamechangers.com/2018/03/02/innovation-addre...-dekkers-podcast 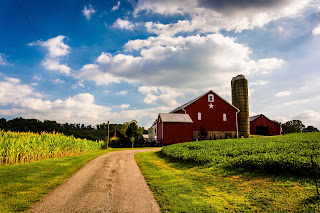