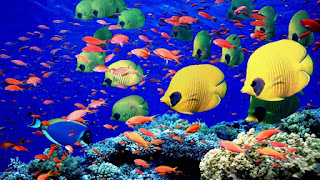 All Natural - From the Sounds of Fish
The Pentagon's DARPA (US Defense Dept.'s Advanced Research Projects Agency) is launching a 5 year research program to enable fish sounds to be picked up by underwater sensor networks to detect silent submarines that are undetectable at this time.  This starts with a rigorous study of fish reactions to disturbances in their environment and the development of underwater sensor monitoring stations to pick-up those sounds and provide alerts to the US military about silent submarines. DARPA calls it the third wave of surveillance  that's adds on to passive and active sonar detection systems.  For a great news blog on this, go to Important Innovations Collection: Sounds of Sea Creatures as Sub Detection: DARPA'S SPY FISH Source:  DARPA Living Sea Creature Submarine Detection Sensor System This is an incredible concept that does n...
# sub #beyond sonar #DARPA #fish. #sound #surveillance