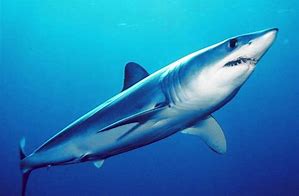 The Mako shark is known as the Cheetah of the Ocean, accelerating up to 80 mph.  A team of aeronautical engineers at the University of Alabama have discovered the mechanism behind the speed.  It's the shark's scales that angle up to 40 degrees and prevent any  drag. If your hand were to go across the shark's skin from nose to tail, the skin is smooth.  If you go from tail to nose, there are scales that go up at an angle. That natural acceleration mechanism has the potential for new designs for faster aircraft. For a great news blog on this go to Important Innovations Collection: Aircraft Innovation from Mako Sharks: Shark Scales Inspire Faster Planes Shortfin Mako - "Cheetah of the Ocean" Mako - Cheetah of the Ocean A team from the Unive...
#aircraft #Mako #scale #sharks #speed