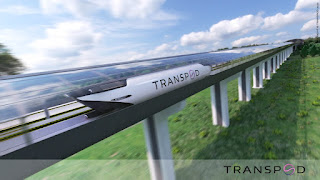 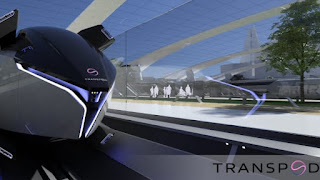 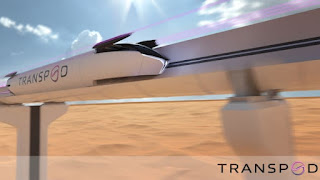 Toronto, Canadian startup TransPod has developed a hybrid train-plane vehicle that can hit speeds of 662 mph.  It's the fully electric powered FluxJet that can travel at speeds six-times that of a train and faster than a jet. The transportation system is based on a new field of physics called "veillance flux".  It is very similar to Elon Musk's original concept of vacuum tube based hyperloop travel, which time-starved Musk told other people to try and develop. Apparently, TransPos did and they're getting the system ready for takeoff in Canada with hopes to carry passengers there in 2035.

The FluxJet travels in an elevated protected tube guideway using groundbreaking technology base on "veillance flux". Vacuum tubes carry magnetically levitated pods travelling at very high speeds up to 662 mph.  The system provides continuous power transmission and aerodynamic and propulsion technologies to minimize friction for the pods.  The concept is to establish train stations in key Canadian cities and locations starting with Calgary to Edmonton.  To build the infrastructure for that first operational corridor will cost $18 billion. The technology has the potential to cut the travel time between Calgary and Edmonton from 3 hours to 45 minutes.

There is a great deal of interest in this novel new form of transportation and plans are moving forward to get it up and running in Canada.  TransPod has raised more than $1/2 billion in financing to start construction in 2023.  It is also in discussions to build similar system in Texas, Australia and Dubai.  At the moment the pods are designed to carry 54 passengers, 2 wheelchairs and up to 10 tons of cargo per trip.  The only competitor to this system is Hyperloop by Richard Branson's Virgin, which will travel at speeds of 600 mph by 2030. TransPod claims that their system can cut ride costs for passengers to 44% less than a plane ticket.  It claims to be on a fast track to become operational.  TransPod says that it is building all of the technologies needed for its system from the ground up. It is a fascinating new form of travel that significantly cuts down on emissions and has the potential of taking significant traffic off the roads.