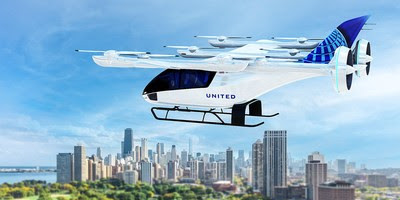 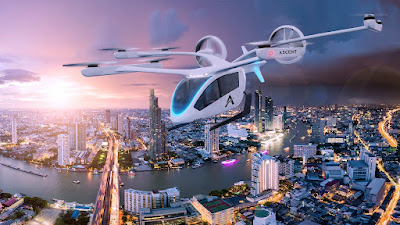 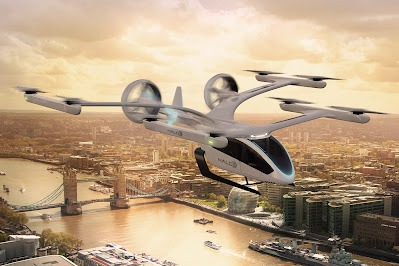 United Airlines is making it clear that it believes flying taxis are a big part of the near-term future of air travel.  United has announced the purchase of 200 eVTOLs (electric, vertical takeoff & landing vehicles) from Eve Air Mobility of Melborne, Florida.  Additionally United has the option of purchasing 200 more eVTOLs from Eve.  And, United is also investing $15 million in the company.  Delivery of the 4-seat electric aircraft will be in 2026.  Eve was recently spun off by Brazilian aviation giant Embraer and went public.  Embraer and Eve maintain working relationships.  As a result, Embraer service centers, warehouses and field technicians will service the air taxis for United, along with Eve technicians.

United and Eve intend to partner on the development and utilization of the Eve eVTOLs and on the all-important task of establishing a regulatory environment for the Eve aircraft along with the overall urban air mobility ecosystem to fly in.  United is the first major airline to invest in two eVTOL companies.  Besides Eve, United has ordered 100 air taxis from California-based Zero Avia, bringing United's purchases of air taxis to 500.  These vehicles have the potential to revolutionize urban commuting around the world.  They are also part of United' s strategy to be net zero carbon emissions by 2050.

The Eve eVTOLs don't use combustion engines.  They rely on electric motors that provide carbon free, sustainable flying. They are specifically designed to be air taxis for urban areas.  The design includes conventional fixed wings, rotors and pushers that provide lift-plus-cruise capabilities. The vehicles have a range on a charge of 60 miles.  They operate quietly and actually emit 90% less noise than a conventional aircraft.  Eve is also creating a new air traffic management software system.  The company says the system can be safely scaled up for the entire urban air mobility industry.