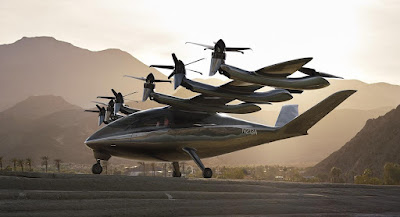 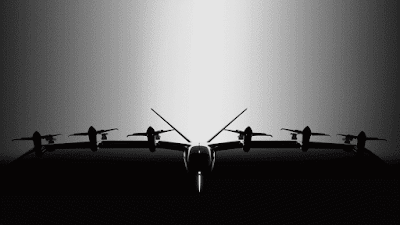 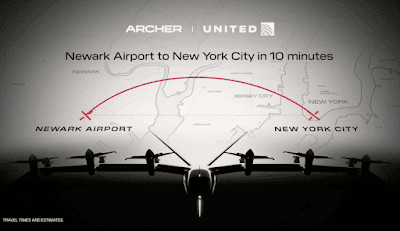 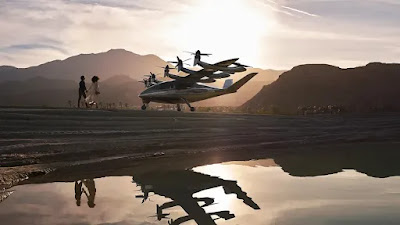 United Airlines and Archer Aviation have just announced the first air taxi route in the United States.  The two collaborators will start air taxi service out of Newark Liberty International Airport to downtown Manhattan and then expand services to connect many other cities to their nearby airports.  The Archer air taxis are called Midnight and they are eVTOLs, which are all-electric, vertical takeoff and landing vehicles.  The air taxis will fly from Newark International to the Downtown Manhattan Heliport in New York City.  Archer says their flying taxi route is a first in the US.

The Mayor of New York City Eric Adams called the first route "bold innovation", and he is thrilled that the service will start in New York City.  Archer's Midnight is expected to go into service in 2025. It will be officially unveiled next week along with a full-scale test flight.

The air taxi flights between Newark Airport and NYC will take less than ten minutes.  It currently can take more than an hour to travel the route by car or train.  Midnight's tech specs are impressive:

The aircraft has been successfully tested.

United and Archer have been partners in the development of the eVTOL since 2021.  Additionally, United has placed a $1billion order for 200 Archer air taxis and has the option of buying another 100 for $500,000,000.  United just made a pre-delivery payment of $10 million for the flying taxis which it believes will greatly enhance passenger travel service.

According to aviation analysts, the air taxi business has tremendous market potential.  In 2022, the air taxi market is valued at $8.09 billion.  That is forecast to escalate to $19 billion by 2026.  These aircraft use green electric energy, have zero emissions and fly without noise.  The fastest growing part of the world for utilization of eVTOLs is forecast to be North America.  And thanks to United and Archer, the takeoff point for this emerging global travel business is the New York City area. For more news stories like this, Latest Innovations For Tomorrow