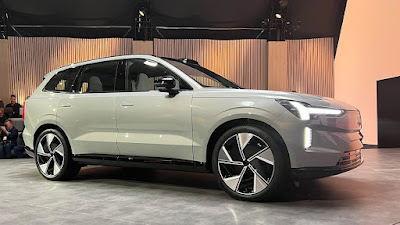 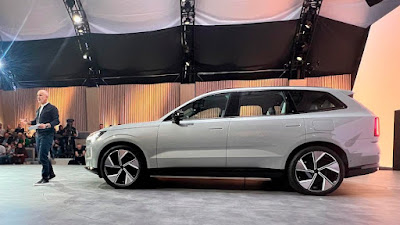 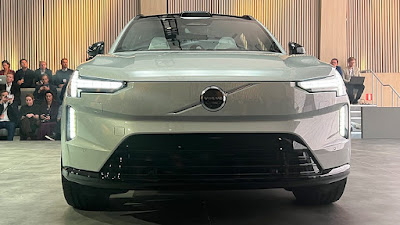 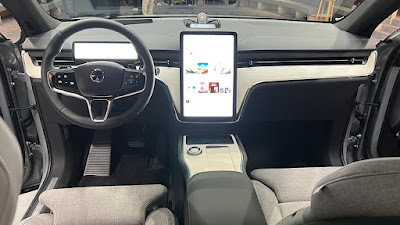 Let's just say there is so much to say about the new, fully electric Volvo EX90 SUV.  The 2024 EV is Volvo's flagship and moves the automaker forward to an electric future in which, in 2030, it will sell only fully electric cars.  The 2024 EX90 is Volvo's first fully electric vehicle that has no tie or connection to a gas-powered motor. The 7-seat SUV has an entirely new electric powertrain platform.  And Volvo claims this is by far the automaker's safest car that it has ever made. Let's delve into some details.

Volvo intends to introduce a fully electric vehicle every year to reach its all-electric sales goal.  The new EX90 has a brand-new powertrain and brand-new technologies.  It looks very similar to and has 3 rows of seats like Volvo's best seller, the gas-powered XC90. The gas-powered XC90 will live on for a little bit longer but Volvo is ending its inhouse development of internal combustion, gas-powered vehicles in order to go all-electric.

Volvo prides itself on its mantra "Volvo For Life" and they are making the claim that the EX90 is the safest Volvo every built. It is loaded with highly advanced technologies.  For instance, the EV offers 360-degree, real-time views for the driver with its 16 sensors, 8 cameras, 5 radar and lidar systems to avoid hitting any objects nearby.  The lidar system can sense and read the road up to 820 feet - at any speed - day or night.  That promises a lot more time for the driver to react, intervene and prevent a crash.  The vehicle also has the capacity to assess the size and shape of objects on the road including potholes.  There is also advanced driver's assistance technology to assist in steering during a lane change.

The EX90 is self-driving ready, when regulations allow it.  It has the hardware to go autonomous in the future.  Right now, inside the SUV there are sensors and cameras that can calibrate the driver's eye concentration while driving.  Volvo says it can identify drowsy, inattentive or sick drivers.  If need be, the technology can safely stop the car and call for help.  The sensor system is so sensitive it can monitor the breathing of a newborn baby that's been left behind in a car to prevent heat injury and death.  The sensors unlock the vehicle, keep the climate control on and flash on the dashboard to check the vehicle for a child and even a pet.  The technologies, that Volvo says it has included, are lifesaving and highly advanced.

Here are the basic details on the EV's capabilities as a vehicle.  It comes in two drivetrain configurations.  Both have dual electric motors, all-wheel drive capacity with a 111-kWh battery pack.  The standard SUV version gets 408 hp and 468 pd-ft of torque.  The more powerful version gets 516 hp and 671 pd-ft of torque.  The range is 300 miles on a full charge with a fast turnaround of a 10% to 80% charge in 30 minutes.  A well-equipped model is priced for less than $80,000.  It sounds like quite an electrifying Volvo.  For more news stories like this, Flight Path to the Future