Solar cars are typically electric vehicles powered solely or mainly by solar energy.  Photovoltaic cells contained in the solar panels convert the sun's energy into electricity.  They combine some of the technologies used in the aerospace, alternative energy, automotive and bicycle industries.  The design of the cars has been limited by the amount of solar panels needed to draw in enough solar energy to power the vehicles.  As a result, prototype solar cars have primarily been built for solar car racing.  But now that is changing.

Road Ready
Chinese solar panel manufacturer Hanergy has developed four prototype solar cars for the consumer mass market.  Production is scheduled for 2019.  The cars are equipped with lithium ion batteries powered by the sun.  They'll first be offered to Chinese consumers and are styled like a normal car. 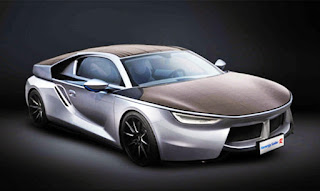 Hanergy says exposure to 5 to 6 hours of sunlight enables the cars to travel 50 miles on solar power alone.  The maximum range of the vehicle is 217 miles.  According to the company, the current solar energy conversion rate is 32%.  They project 38% by 2020, 42% by 2025, making a fully solar powered car possible.

Down Under
A number of other notable R&D programs are underway, including at MIT, UC Berkeley, Carnegie Mellon and University of Michigan.  A long time standout team is the University of South Wales.  Their series of concept solar cars - The Sunswift - have won global races. The team is currently focused on making it Australia's first road legal solar car. They're developing its mass market potential and giving it a consumer forward look.