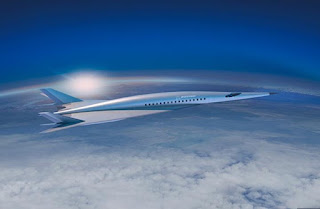 Unveiling of World's 1st Hypersonic Passenger Jet Design
Boeing's prototype rendering unveiled today is the world's first look at comercial hypersonic design and what the jet will look like.  The design enables the speed and the speed is awesome.

Travel Times
Boeing's hyper-speed passenger jet can fly from New York to London in 2 hours versus the current 7 hours.  Or how about LA to Japan in 3 hours, versus 11 hours.  The design plan is for the jet to fly at Mach 5 or 3800 miles per hour, much faster than its predecessor The Concorde at 1,354 mph.

No Speed Competition
With speeds of Mach 5, Boeing's hypersonic jet has no current competition.  The closest competitor is Aerion Corporation.  It's high speed passenger plane is expected to reach 1.5 Mach.  But, there are many global players working on their design concepts and looking to win the hypersonic flight race.

Hypersonic To-Do List
Much work need to be done before the high-speed passenger jet takes off.  Boeing needs to develop lightweight material for the fuselage to withstand Mach 5 speeds and engines to carry it to Mach 5.  Also a cooling system much more advanced than current ones is needed.  There's also the question of time and costs.  The jets will cost billions to develop and build over at least the next 10 years.

Take-off Commitment
Boeing's leadership is committed to hypersonic jets carrying passengers in the next decade or so, revolutionizing global travel .   But, will hypersonic travel be commercially viable?  Will enough passengers be willing to pay a likely high ticket price?  Boeing is betting they will and is moving forward full steam ahead.

Hypersonic Future
Boeing has partnered with the US Department of Defense's Advanced Research Projects Agency DARPA on hypersonic flight for a number of years.  Boeing just signed a contract to build for DARPA and the US military the X-37B Spaceplane, the Phantom Express, which takes off vertically and flies at hypersonic speeds, launching satellites into space and then flying back to earth.  It's expected to make a debut in 2020.  So, clearly the time of hypersonic flights is speeding toward us.