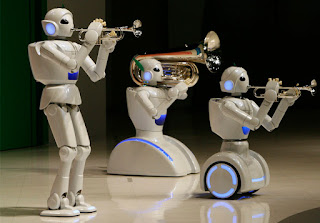 On his latest album, Italian electronic music producer Leonardo Barbadora is using an all-robot orchestra.  The robots are capable of playing more than 50 acoustic instruments on command.  The instruments include the piano, percussion, wind instruments and the organ.  Barbadora controls the robot musicians from his laptop.  It's robotic innovation on a high note.

Perfect Tuning - Human Sound
What's intriguing is that Barbadora is using the robot orchestra to achieve a more "human" sound.  They're playing real instruments and provide a much richer sound than you get from digitally synthesized instruments.  His robot album is called Saxrobot.  It won't be finished and published until 2019.

Robots and the Sound of Opera
In late June, a robot named YuMi conducted a full orchestra successfully and to rave reviews.  It happened in Italy, the homeland of  Vivaldi, Verdi, Puccini, Respighi and so many other musical greats.  The robot, created by Sweden's ABB, conducted the Lucca Philharmonic Orchestra, along with conducting Italian tenor Andrea Bocelli, without missing a note.  It was part of Italy's 1st Festival of Robots.  Spectacular robotic tech that sounded just the right note!

Robots on a High Note
It appears that robots have a big future in the world of music.  By the way, one of the largest robot orchestras in the world is at the Logos Foundation in Ghent, Belgium.  They've been developing robots to play acoustic instruments for 20 years.  Many robots are now making their musical debuts.
#Italy's Festival of Robots #robot conductor #robot musicians #robot orchestra