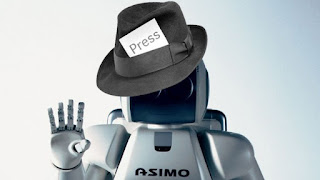 I am Not a Robot!

Yesterday, I blogged about robot attorneys.  It's forecasted that by 2030, robotics and artificial intelligence will dominate the legal profession and totally restructure it. The robotic revolution goes across industries. Oxford University researchers forecast 47% of all US jobs will be held by robots within 20 years.  As a journalist, I wondered if similar disruptions could possibly happen in the world of news and sports reporting.  Much to my chagrin, the answer is yes.

Robo News on a TV and NewsStand Near You

Robotics have had a significant photographic role in the news business.  Robotic cameras have been in television studios for news and entertainment programs in the US for about 15 years.  And drone cameras are used by the print and broadcast press to shoot stills and video particularly in breaking news situations. Drone cameras are common even in small news markets, like Cape Cod, Massachusetts.  But traditionally the live observations and fact collection by reporters on the scene of breaking news or sports have been the bedrock of news coverage.  That's now starting to change.

Artificial intelligence software that generates robo news has been created by Northwestern University.  A company - Narrative Sciences that specializes in machine generated stories utilizes that software and has turned it into a robotic news business.  It's being used to generate baseball and softball stories.  The Big Ten Network, which is owned by Fox Entertainment, utilizes it.  Executives say it's cheaper and can be more accurate than stories from human reporters.  Here's an example of how it works.  After a baseball game, scorekeepers email all the game data to the bots.  The bots analyze it and spit out a story in minutes. Quicker, cheaper and possibly more accurate reporting. Other news organizations starting to try the robotic approach include the AP, Fortune and LA Times.  So, even journalists may be handing over their bylines to robots.
AI Robot News Reporters robotic innovation Robotics