Bat Bots At Your Service 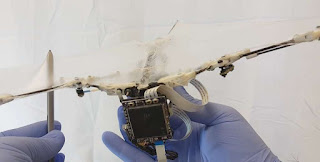 Flying service Bat Bots. Tiny aerial robots are being developed for multiple uses such as first responders at disaster scenes and to fetch objects for the elderly and hospital patients.  It's another example of life saving and life enhancing innovation addressing some of the world's pressing needs.

The concept is elegantly simple.  Bats are marvelous flying machines.  Their agility and dexterity are unique.  For years, roboticists have tried and failed to create bat bots.  Until now.  Two separate research teams, the industrial automation company Festo and a combined group from NASA and California Institute of Technology, have launched bat bots.

Bat-like flight is the Holy Grail of robotics.  That's because of the wing/body complexity and the aerodynamic performance.  Bats have the most sophisticated wings in the animal kingdom.  40 wing joints power their flight.  The NASA-Caltech bat bots can fly, turn and swoop just like the real thing.  They're lightweight, 3.3 ounces, with a wingspan of 18.5 inches.  They're composed of 3D printed plastic with a thin coating of silicone.  They fly at 18 feet per second and swoop at 46 feet per second.  The team's next goal is to make the tiny robots more user friendly through softer wings and increased energy efficiency.

Festo creates animal inspired robots such as butterflies and kangaroos.  They call their bat bot the Bionic Flying Fox.  It flies semi-autonomously on machine learning.  The wings are composed of film and elastic fabric with 40,000 stitch points.  Its lightweight.  A system of motors and gears provide power and steering.  Like the NASA-Caltech version these are complex flying machines being readied for service.  They have many potential applications from spotting life in disaster zones to aiding the elderly.