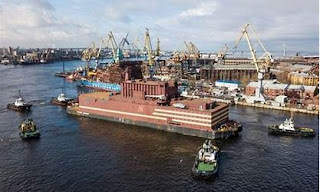 It's the world's first commercial, floating nuclear power plant.  21,500 metric ton Akademik Lomonosov is slowing making its way in a multi-stage trip across Russian waters.  It's controversial technological innovation to say the least. Some environmentalists call it the floating Chernobyl, Fukushima on ice and a nuclear nightmare.

This is an important update on a blog we posted about a month ago.  The floating nuke is now at Murmansk where it's being loaded with nuclear fuel.  Next stage in the journey:  "sail" the Arctic Sea to Pevek sometime in 2019.  There, it will be moored and start providing electricity to Chukota and its 50,000 population.  That's its first mission.

Mobile Nukes on Ice
The rationale for the floating nuke is intriguing.  Mobile, transportable nuclear power plants that can get to remote areas of Russia's far east and north to service energy needs.  Its ocean going mobility enables it to get to locations in need of power generation.  It's now capable of powering small cities with populations up to 100,000.  Thanks to global warming and the reduction in sea ice, Akademik can traverse once ice-entrapped coastal areas of Russia.  But the pressing question is:  is it safe?

From Russia With Energy
Russia's State Nuclear Energy Corporation Rosatom says it's safe and designed to withstand any potential disaster.  It claims the floating nuke meets all International Atomic Energy Agency requirements and poses no environmental risk.  Point of fact:  there are many floating nuclear powered vehicles on our oceans.  The US and Russia have dozens of nuclear subs, warships and aircraft carriers deployed.  Russia's Akademik generates 70 MW of electrical energy and 50Gcal/hr of heat energy.  That's 1/10th of what the Gerald R. Ford-class aircraft carrier generates - 700MW.  Also the US has dabbled in this.  US tried a nuclear barge STURGIS to power the Panama Canal region between 1968 and 1976.  Nuclear tech has come a long way since then.  Still, there are big questions and concerns.

Environmental Concerns
Russia's floating nuke has 2 KLT-40S nuclear reactor units on board.  Critics warn about the potential of environmental catastrophe if it collides with an iceberg, grounds, gets slammed and sunk by waves or terrorist attack.  They're demanding more transparency from Russia in the form of  international oversite.  They add a lesson from Fukushima Daiiche:  nukes and water don't mix.

Mobile Nuclear Plant Future
Some energy experts believe Akademik is the first in a series of floating nuclear power plants that Russia will deploy in the Arctic to support oil, gas, coal exploration and to provide electricity and heat to remote population regions.  Greenpeace in particular is demanding international oversight because of the unknown effects of the rocking and rolling of waves on a floating nuclear power plant.