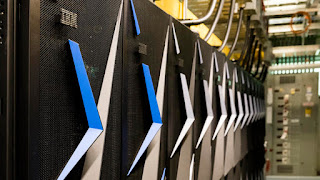 Fast, Smart and Peerless
It's the world's fastest and smartest supercomputer.  Summit at the Oak Ridge National Laboratory in Tennessee. And this machine with AI is a humbling experience.  It can calculate in 1 second what it would take us humans 6 billion years to do.  Summit gives the US leadership over previously top ranked China in the supercomputer neural network race.  By comparison, Summit can make 200 quadrillion - that's 200 with 15 zeros - calculations per second.  China's Sunway TaihuLight, which was the world's fastest supercomputer, can do 93,000 calculations per second.  There's no comparison!

Very Different Computer Architecture
Summit is an IBM AC922 that composed of 4608 computer servers, all comprising processors which are the brains of the computer.  But what's breakthrough is the computer is using the new Tensor Core in its graphics cards.  That enables warp speed, Artificial Intelligence and machine learning. AI learns using neural networks which essentially allow lower calculations to feed into higher ones.
Oak Ridge scientists say the heavy use of matrixes has allowed them to break the exascale computing barrier - a processing speed over a billion billion calculations per second.

Addressing the World's Most Pressing Needs
Summit is built to integrate AI into computing.  That opens up a world of possibilities. For instance, new discoveries for curing cancer and other diseases through precise, individualized therapies and medicines.  Remedies for climate change.  With Summit, the sky's the limit.  Oak Ridge scientists say new breakthrough innovation developments are going to be at the intersection of machine learning and simulation science.  Summit can do both in very significant ways.

Superfast
Summit is a supercomputer on steroids with no peers.  As Oak Ridge scientists put it, Summit enables us to "scale new heights and discover new solutions."
#AI #breaking exascale #Summit #supercomputers