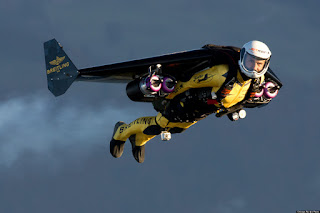 Up, Up and Away
With the intense global R&D underway to bring the first flying car to market, I wondered what the status of jet packs is.  They were all the rage earlier in this decade  Turns out, they're still around but haven't matured technologically for widespread commercialization...yet.  They are one of the most difficult and complex pieces of flying equipment to engineer.  They also remain dangerous to fly.

New Takeoffs with Jet Pack Man
Nick Macomber is known as the Jet Pack Man.  He and his jet pack opened the London Olympics, flew over bridges in Ireland and have flown as part of innovation conferences in China.  His company Go Fast Sports & Jet Pack International predicts an upcoming renaissance in jet packing.  They've created a prototype with a turbine based platform that's capable of flying 30 minutes.  That could open up the possibility of commuting to work or school by jetpack.

Weight to Thrust Ratio Challenge
With jet packs, the challenge is weight. Macomber's jet packs weight 65 pounds.  When loaded with fuel, hydrogen peroxide, they double in weight.  It can catapult you as high as 250 feet, but flight time is around 33 seconds because of the enormous amount of fuel it takes to lift off the ground.  The more fuel you add to lengthen the flight, you start reaching the point where you can't get off the ground.

Next Flights
The industry is working on the next generation of jet packs to enable humanity to have their own personal flying machines.  Macomber believes the technology will be there in the next couple of years.  If so, you'll be able to say good-bye to your daily traffic jammed commute and soar above it.