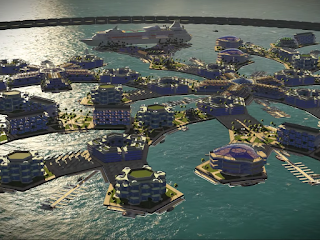 Innovation Island for You

The world's first floating city project is underway.  Non-profit think tank Seasteading Institute and the government of French Polynesia are spearheading the project.  They've signed an MOU and a deliberative launch process is now happening.  The floating city will be sited in waters off Tahiti.  It will be autonomous, with its own government and cryptocurrency, the Vargon. The host nation is French Polynesia. It will include residences, hotels, restaurants, offices, medical research facilities, aquaculture farms and a green powerplant. They're designing the island to foster innovation. Estimated project cost:  $167 million with construction expected to start in 2019.

Island Adventure in Paradise: Environmentally Correct and No Politicians
This is PayPal founder Peter Thiel's island adventure that started a dozen years ago and is now becoming a reality.  Thiel co-created Seasteading Institute and provided seed money for it. There's a philosophical and environmental foundation driving this concept.  It originally was conceived as a Libertarian Utopian Island with its own government, uncontrolled by existing nations.  That autonomy remains with the Institute's hope that the island will start "to liberate humanity from politicians."  The Institute also believe that the world needs to look toward the ocean for innovative solutions to rising sea levels, climate change, booming populations and poor governance.  Their floating city is designed to address all of these pressing global needs for their residents.

Island Living with a Price Tag
Construction funding is being crowd-sourced by creating and selling a virtual currency.  They hope to raise $60 million by 2020 to build a dozen buildings.  They plan a foundation network of 11 platforms of reinforced concrete, capable of supporting 3 story buildings.  Seasteading hopes to locate the floating island in shallow waters of the Pacific behind a reef break so they can design floating platforms at an affordable cost.

Floating Island with Mixed Use
The project includes 300 residences - all green and environmentally correct.  They're targeting markets for residents, tourism, aquaculture, business parks, research institutes and a powerplant that would sell energy and water to the host nation.  An independent company Blue Frontier will develop and construct the floating island and operate its sea zone.  Seasteading Institute expects "a fresh start on the floating community by 2020."  No pricing for the residences in paradise is listed yet on the website. But the Institute hopes there will be thousands of floating cities by 2050.