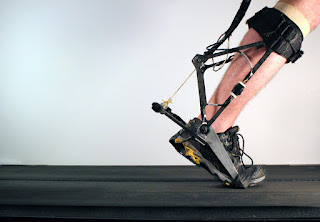 Bionic Smarts Exoskeletons, the wearable medical devices, that help people to walk, just got very smart.  Researchers at Carnegie Mellon University School of Engineering have developed a new algorithm for the bionic devices.  It's called "the human in the loop".  The algorithm learns and customizes the bionic assistance based on the wearer's every step, helping to facilitate and smooth out their walking.

Bionic Man
The exoskeleton is worn on the shin and the foot.  It applies force to the ankles and toes.  Tested on a dozen able-bodied people, it took an hour to optimize  Once optimized, it cut the amount of energy expended walking on a treadmill by 24%.  Previous testing of exoskeletons resulted in a 14% energy exertion cut at best.

Multiple Uses - Running and Walking
For those impacted by stroke, neurological disorder and paralysis etc., this innovation could provide significant hope and help.  The "human in the loop" algorithm empowers the exoskeleton to provide a myriad of assistance patterns to the ankles and toes.  The algorithm tests the patient's response to 32 different patterns of assistance, changing every two minutes.  The patterns include when the force is applied and the amount of force.  It measures what makes it easier and more difficult to walk.  After an hour, a unique pattern of assistance is optimized for each patient.  Experts say this could also be used to maximize performance in athletes and runners.

Two-Way Street
What's especially fascinating is the learning inter-dependency between the wearer and the exoskeleton.  They work as a team, learning from each other, step by step, and adapting the best approach to walking.

Next Steps
The Carnegie Mellon team has a series of next steps in their research. Their goal is to develop a "human in the loop" algorithm to create a smart exoskeleton with six joints designed to be worn on the entire lower half of the body.
Algorithms Bionic Man Carnegie Mellon Exoskeleton Smart Exoskeletons