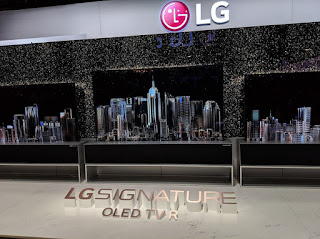 Press a Button and Screen Unfolds in Seconds
When you press a button, in ten seconds, a flat, 65 inch, 4K television unfolds.  When secured in its aluminum base, the container looks like a large speaker or metal coffee table.  This innovative concept has been named by PC Magazine as the Best TV of the Consumer Electronics Show 2019.  The reason:  its dexterous roll-up ability and the vivid colors and contrast that OLED delivers.  For more news stories on exciting innovation, go to amazon.com/author/ekane