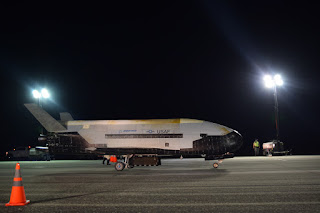 Successfully Lands After Record Orbit
The US Air Force announced that its top secret, experimental spaceplane - the X-37B - just successfully landed at NASA's Kennedy Space Center in FL after a record flight. The spaceplane has been more than two years - 780 days - in orbital flight.  This is its longest test mission for a group of military technologies.  The X-37B is an experimental, test spaceship.  It was built by Boeing, is operated by the US Air Force and was launched into its latest mission aboard a SpaceX rocket.

Clandestine Missions
This is the spaceplane's 5th mission.  What the missions have entailed are for the most part a mystery.  They are top secret missions.  But we do know the purpose is to demonstrate new technologies, such as propulsion systems, avionics and spacecraft reentry systems for what the Air Force hopes will be a "reliable, reusable, unmanned space test platform".  The vehicle will remain on the ground for several months and will be relaunched again sometime in 2020.  For a free Kindle borrow of fellow journalist Ed Kane's latest book "Big Space News 2019", go to https://www.amazon.com/gp/product/B07TYG31KM/ref=dbs_a_def_rwt_bibl_vppi_i14
amazon.com/author/ekane