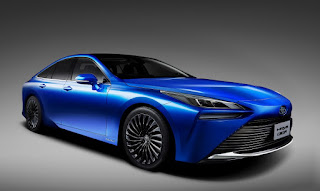 Driving on Hydrogen Power
Toyota is making a bet that the preferred fuel of the future is hydrogen.  They just unveiled their 2021 Toyota Mirai concept design.  The 4-door sedan is powered by hydrogen and has enough room inside to accommodate five people.

Taking Its Own Road
Toyota is going a different direction than its major global competitors which are placing their bets on electric battery powered big vehicles like SUVs and trucks.  Toyota will start selling the hydrogen powered vehicles in late 2020.  It adds that it will ramp up production ten fold for what it believes will be a very popular mass market, four door sedan.

Not Putting All Its Eggs in One Technology Basket
For Toyota, electric vehicles are also in its mix, although it does have some concerns about the electric vehicle market.  Namely, Toyota worries about the uncertainty of consumer demand and the technical challenges of extending battery range and cutting recharging time.  Nonetheless, Toyota promises to have electric versions of all of its models within five years.  It also says it will have 10, new fully electric vehicles in the early 2020's.  And, while Toyota is not putting all its eggs in one basket, it is really interested in getting consumers to give hydrogen fuel power a try.
#electric vehicles #hydrogen #Japan #Mirai #sedan #Toyota