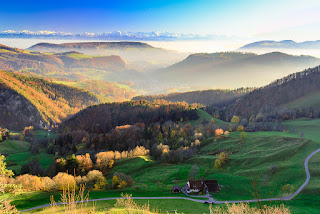 Swiss Innovation to Reverse Global Warming
Swiss scientists from ETH Zurich University are injecting carbon dioxide into rocks deep inside a mountain to see if they can lock it away and stop increasing climate change.

Novel Experiment
Carbon dioxide is the main contributor to global climate change.  In the Swiss Jura Mountains, there is a layer of rock that contains impermeable clay.  Scientists are trying something novel.  They're injecting carbon dioxide into the impermeable clay to see if it can be captured and doesn't leak.

Lab in a Mountain
This is scientific innovation being performed in a lab in a mountain.  The scientists are now pumping carbon dioxide dissolved with salter water into rock.  They want to see if the gas interacts with the clay and a fault develops in the rock and the CO2 leaks.  If it doesn't, they may have invented a new means of reducing carbon dioxide in populated areas.  A number of nations and corporations are supporting this research including Switzerland, France, the US, Japan, Chevron and others.