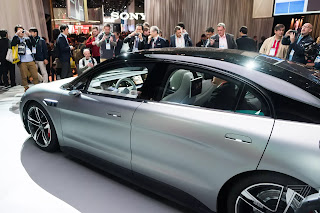 Sony's Vision-S
Sony is the big surprise at the annual global, consumer electronics trade show CES 2020 in Las Vegas this week.  Sony announced a real, working Sony electric car that's loaded with Sony technology.  It's Sony's vision of the future of driving.  The EV is a concept-prototype that offers an awesome ride.  Sony has no immediate plans yet to move it into mass production.  But it is an electric, very high tech ride that's ready to go.

Sony Tech
The technological concepts in the Vision-S are exciting.  On the dashboard, touchscreens in the middle and in front of the passenger seat, allow the driver and passenger to access all the media controls like music, movies, vehicle settings and more.  Also, there is a series of rectangular displays that span the entire dashboard and user interfaces. For rear seat passengers, there are seatback touchscreens. There are also advanced speakers in all of the headrests.

Drivetime
The Vision-S goes from 0 to 60 in 4.5 seconds with two, 200kW electric motors.  The car has a top speed of 149 mph and a range of 277 miles on a charge.  Sony's camera sensors are onboard to provide autonomous driving.  Image sensors replace traditional mirrors.  And, there are ten image sensors embedded throughout the vehicles along with Lidar, radar and ultrasonics.  For Sony, their Vision-S provided them with a pivotal opportunity to place their emerging technology into a workable electric car.  Very impressive!


For a free sample read of my journalist colleague Ed Kane's  latest book "Investing in Disruptive Innovations" go to https://read.amazon.com/kp/embed?asin=B083LGWYWK&preview=newtab&linkCode=kpe&ref_=cm_sw_r_kb_dp_qwJfEb5YGWVFV

For a sample read of  "Hot Electric Vehicles for the 2020's", go to https://read.amazon.com/kp/embed?asin=B082GKV1ZY&preview=newtab&linkCode=kpe&ref_=cm_sw_r_kb_dp_2yJfEbDJFX2WQ

amazon.com/author/ekane   I co-authored the books with fellow journalist and colleague, Ed Kane.