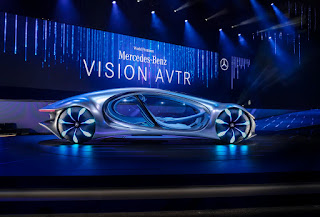 Unique Concept Car Based on Avatar Movie
When Mercedes Benz looks at the future of driving, it envisions all-electric, autonomous vehicles.  The Vision AVTR concept car captures their imaginative, creative vision.  The design of  this sustainable, electric, autonomous concept car was influenced by the blockbuster, sci-fi movie Avatar that was released in 2009.

Driving with No Steering Wheel
The technology and technology concepts in the car are spectacular.  There's a 110 kilowatt hour electric motor that produces 469 horsepower and  has a range of 435 miles.  The car self-drives and has no steering wheel.  Mercedes Benz designers say the car would establish "a biometric connection with the driver".

Driving on the Vegas Strip


The Vision AVTR took a spin on the Las Vegas Strip recently at the 2020 CES.  There are transparent doors, a vegan leather and recycled interior and the wheels glow with LED lights.  Incredibly, the vehicle can move sideways.  The car moves forward, backward, diagonally and sideways.

Sustainability
Mercedes Benz wants the Vision AVTR to be powered by battery technology using graphene, which is the strongest material on Earth but still thin and flexible.  Research indicates that graphene based batteries could charge 12-times faster than lithium batteries.  Graphene batteries aren't on the market yet.  MB wants those batteries to be completely compostable and recyclable.  The Vision AVTR is MB's latest concept car vision of the future of driving with sustainability
#autonomous #concept cars #electric #EV #Mercedes Benz #news #Vision AVTR