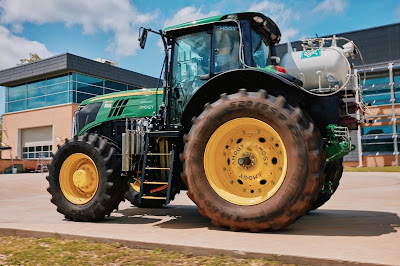 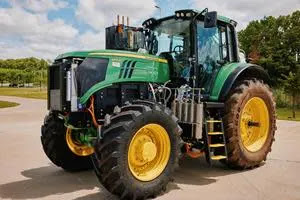 A Brooklyn New York-based startup, Amogy, is developing an ammonia-based energy technology that is designed to eventually replace the diesel engine in the heavy duty transportation industry.  The highly efficient, ammonia-to-power technology is awesome.  Amogy was founded in 2020 by four MIT PhDs who share the same vision for zero emissions transportation.  Their zero emissions technology is so impressive that the startup is being bankrolled by none other than Amazon. Amogy has already achieved a world's first with their farm tractor powered by ammonia.  And, their new innovative technology is not just for tractors.  They believe it can be used for trucks, ships and other heavy duty travel vehicles.

How Does It Work?

A standard John Deere tractor is retrofitted with a standard liquid fuel tank and highly efficient ammonia cracking molecules integrated into their unique hybrid fuel cell system. The system splits the ammonia molecules into hydrogen that powers the 100 kW heavy duty tractor to perform regular farm work for several hours with zero emissions. Their tractor and system are a world first. Refueling the tractor with hydrogen is fast and easy.  The team estimates that over the next year they will continue to develop their technology, which they believe has the potential for rapid deployment and widespread global application.

What Are the Benefits of Ammonia As a Power Source?

The benefits of using ammonia as a power source are compelling:

This new ammonia-based fuel system could prove to be a significant gamechanger going forward as the world moves away from diesel engines and toward a future of decarbonization.