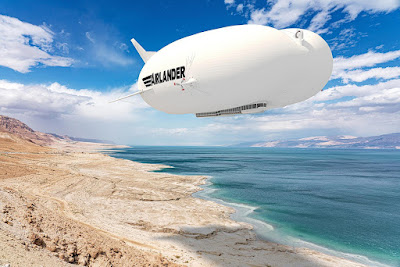 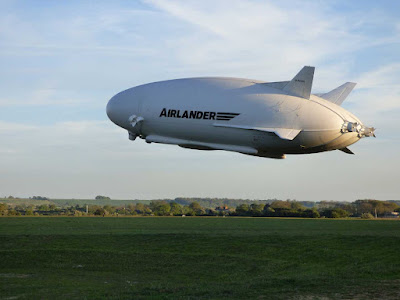 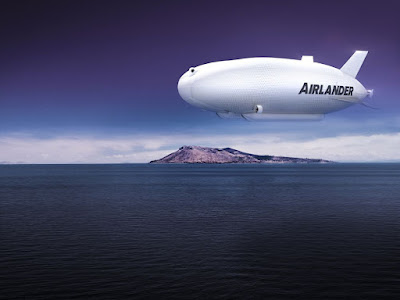 The Airlander:  New Mode of Regional Travel in Europe

By 2026, passengers could be flying back and forth between the UK and Spain on next-G, helium powered airships, called the Airlander  10. The Airlander is a long-endurance, multi-intelligence vehicle (LEMV) and the world's biggest lighter-than-air vehicle.  It can travel at speeds of 148 km or 92 mph.  For passenger service, the maximum speed will be 80 mph and the average travel distance will be 185 to 250 miles.  As unique aviation technology and multifunctional in operations, it can be configured for passengers or cargo.  And, its business operations just took off.  A $600 million deal has been struck by British Airways' sister company Air Nostrum, based in Spain, to buy 10 Airlanders from British company Hybrid Air Vehicles.  Hybrid Air is a new startup with cutting edge helium airships, backed in part by British hard rocker and pilot Bruce Dickinson of the Iron Maidens.

The Airlander is a hybrid aircraft that took its maiden flight in August 2016.  It is unique, breakthrough aviation technology. Its aerodynamic design contributes to 40% of its lift and helium buoyancy allows it to stay aloft for long periods of time.  In fact, for certain missions, it can stay aloft for 20 days. The airships ordered by Air Nostrum can carry 100 people.  Production on them will start in northern England later this year.  The airship has a helium filled hull. For lift and travel, it uses four LT V8 direction-injection diesel powered combustion engines, that drive ducted propellers. Two engines are located on the front and two on the back of the airship. The airship also has two wings and a tail fin in the back for stabilization.

This is a greener form of air transportation.  In fact, according to Hybrid Air Vehicles, it cuts emissions by 90% as compared to regular aircraft.  By 2030, it will be powered by all-electric motors with zero emissions.  Furthermore, the Airlander has been approved for service by some European regulators. It also offers tremendous take-off and landing flexibility.  It doesn't need an airport. It can operate from a grassy field, sand, water, ice and more. Besides travel, it can be used for communications, surveillance, research, cargo hauls and more as it has the capacity to stay aloft at 20,000 feet for 3 weeks.  It offers a very different take on the future of flying.  Loaded with windows in the passenger section, it also offers the travelers stunning views. It's a new look at the future of travel, particularly regional travel by air that is significantly better for the environment.