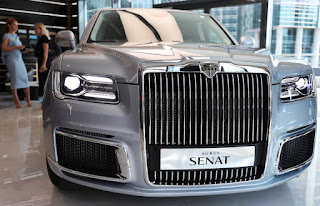 Taking Orders Now
Russia's first post-Soviet era luxury sedan just went on display and sale in Moscow this weekend with an official showroom. The car is part of the Aurus brand, used by President Vladimir Putin in his inauguration in 2018. Hence, the nickname the "Putin Limousine".   The Aurus Senat sedan is based priced at $274,000.  Aurus is taking orders for the vehicle.

Targeted, Global Customer Base
Aurus says that the targeted customer base is government officials and businesspeople in China, Europe, the Middle East and North Africa.  Russia has invested $189 million in the Aurus limousine project since 2013.  There are plans to open a showroom in China in 2020-2021.

Electric Vehicles on the Horizon and a Lot More
The vehicles are produced by a Russian research institute NAMI in partnership with Russian carmaker Sollers.  Luxury hybrid and electric models are targeted for 2024.  They are also developing a SUV, minivan, an extended sedan and shortened limousine.  The Russians are back in the global car race, starting at the luxury part of the market.
#Aurus #China #electric vehicles #luxury sedans #Russia