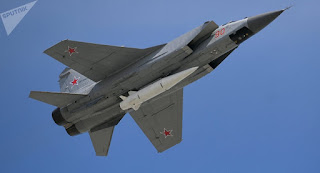 "Unbeatable" According to President Putin
The Russian news agency Tass, citing military sources, reports that Russia tested a hypersonic missile over the Russian Arctic within the past two weeks.  A MIG 31 Intercept jet performed the testing of the Kinjal Dagger hypersonic missile.

Ground Target
The missile was fired against a ground target at the Pemboi training grounds in Russia's Arctic Komi region.  No other details were provided.  Russian President Vladimir Putin has bragged that the Dagger missile is unbeatable and capable of evading any enemy defenses.  The Kinjal Dagger is said to be capable of hitting targets 1,250 miles away with conventional or nuclear warheads travelling at hypersonic speeds.  Average hypersonic speeds range from Mach 5-10.

Danish Defense Warning
Meanwhile in its annual risk assessment report, the Danish Defense Intelligence Service warned of a "great power play" shaping up between the US, Russia and China that's increasing the level of tension in the Arctic region, with much including valuable mineral deposits and strategic positioning at stake at the top of the world.  For a sample listen or free ACX code for a free copy of the audiobook "Important Innovations Collection - Travel" by Ed Kane go to amazon.com/author/ekane
ejkane2@gmail.com  and https://www.amazon.com/gp/product/B07N15VKCW/ref=dbs_a_def_rwt_bibl_vppi_i9
#hypersonic #Kinjal Dagger #Mach 5-10+. #Putin #MIG 31 jet #missile #Russia #test