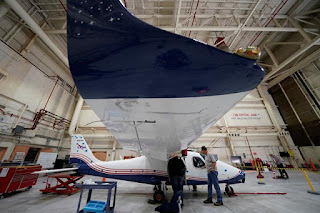 X-57 Maxwell
NASA, the US space agency, has unveiled its first, all electric plane.  The experimental aircraft is called the X-57 Maxwell.  NASA calls it a work in progress.  It's an early version of its first green plane designed to lead the way for the aviation industry into a new era of electric aircraft and cleaner skies.  Tests in the air are expected to begin early next year.

X Planes with 14 Electric Motors
The X-57 Maxwell is the first crewed X planes in two decades.  The early model of the airplane along with a simulator to allow pilots to experience what it's like to control the Maxwell in flight are at a NASA facility in California.  The model replaces a traditional combustion engine with 14 electric motors powered by lithium batteries.  The engines are designed to be quieter, more efficient and much better for the environment.

Leading the Way Toward Electric Flying
NASA is now focusing on more testing of new features such as a high-aspect-ratio wing.  NASA says it is developing technology and features that will help the entire electric plane industry.  The agency hopes to fly the plane in the late 2020's.
#electric #electric planes #green #lithium batteries #NASA #plane #X planes