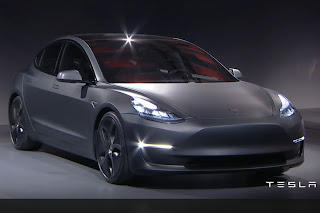 German Engineering Talent Powers Elon Musk's Move to Europe
Tesla founder and CEO Elon Musk has announced that he's starting operations in Germany to produce electric cars and batteries.  This is a tribute to German automation and engineering prowess.  Musk flew in to the US six planeloads of robots and equipment from Germany, in the past year, to accelerate battery production for his luxury electric sedan Model 3.  Germany's automation talent ended bottlenecks in his Tesla plant in California.  It was so successful it's now powering his battery move to Europe via the new operations in Germany.

Direct Global Electric Vehicle Competition
By opening operations in Germany, Tesla is in direct competition with many of the world's top luxury brands headquartered in Germany, including Audi, BMW and Mercedes.  All of these iconic brands are developing their own electric vehicle models.

Electric Vehicle R&D Is Very Expensive
Global automotive companies are finding that switching to a lineup of electric vehicles is extremely expensive.  But it's necessary because green travel is the future.  A case in point is Daimler.  It just announced that it's cutting 1000 jobs including 10% of Daimler management.  Its goal is to cut $1.1 billion in costs by 2022 while it transitions to building electric vehicles.  Daimler adds that tougher fuel efficiency standards are also cutting into profits for the next two years.  The big picture:  electric vehicles are costly to develop and the sales volume for them isn't the greatest yet.  But it is the future and top global automakers are jockeying for positions of e-leadership.
#Audi #BMW #California #cars #daimler #electric #Europe #Germany #Tesla