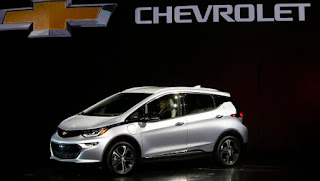 Driving to an All Electric Market
Over the next five years, GM CEO Mary Barra expects to spend more money on research, development and selling electric vehicles than gas powered cars.  She also thinks the production of electric cars will be less labor intensive than gas powered vehicles.  GM has 20 electric models in the pipeline that will be on the market in 2023.  Barra believes the future of driving and the future for GM is fully electric.

UAW Contract:  No Limits on Electric Vehicles
CEO Mary Barra shared her vision of the future of electric vehicles with the Wall Street analyst community.  She forecasts that electric vehicles will start becoming an increasingly larger part of the sales mix by 2030.  Barra just signed a labor contract with the UAW union that is concerned about its membership losing jobs because of the less labor intensive manufacturing of electric vehicles.  However, the new UAW contract does not limit the number of electric cars that GM can build.