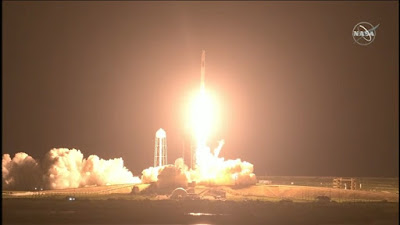 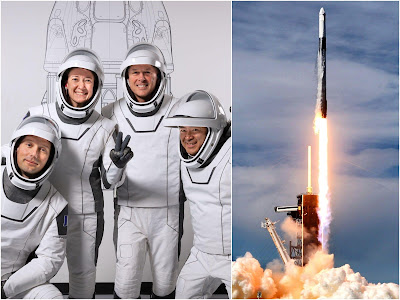 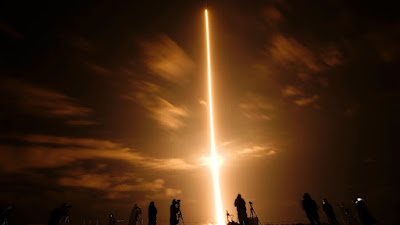 This morning, Space X launched a crew of four astronauts to the International Space Station aboard a recycled, reused Falcon 9 rocket booster, dubbed B1061, by SpaceX.  The launch made history multiple times. It is the first time that astronauts have flown on a recycled, reused Crew Dragon capsule, named Endeavor, coupled with a reused Falcon 9 first stage launch rocket.  It is also the first time that astronauts representing three different space agencies - NASA, Europe's ESA and Japan's JAXA, have ridden in the same space capsule.  Space X's Endeavor made history last May when it became the first commercial space vehicle to ferry NASA astronauts to the ISS as part of the first launch of astronauts from the US in twenty years.  Today's flight not only made history.  It provided a spectacular light show in the skies from Florida to the mid Atlantic states.

Today's successful launch by Space X is another big step forward in the commercialization of space flight.  For NASA, developing a reliable system of flying on reusable, flight proven vehicles is a priority and the key to expanding space travel.  NASA is relying on commercial enterprises like Space X to do it.  According to Space X senior director Benji Reed, reusable space craft provide greater flight flexibility, reliability, lower costs and "ultimately helps us make life multiplanetary."  Endeavor is expected to dock with the ISS tomorrow morning.  The capsule and 4 crewmembers will remain aboard the ISS for six months.