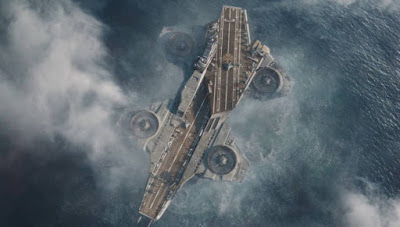 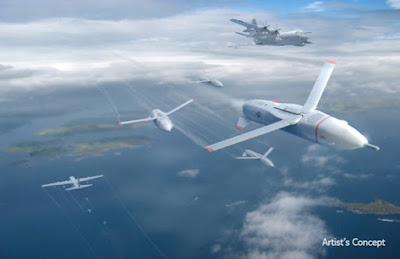 The Pentagon's DARPA (the Defense Department's Advanced Research Projects Agency) is working at forever changing the face of warfare.  They are developing for the US military huge, flying aircraft carriers.  The carriers would be loaded with highly advanced drones, called Gremlins, instead of fighter jets.  Military officials believe the carriers would be safer in the the sky than on the ocean where they are becoming increasingly vulnerable to long range missile attacks.  The Pentagon is particularly concerned about new maneuverable, ballistic missile technology from China.

The US Navy currently has 11 nuclear powered carriers.  Each carrier contains up to 80 fighter jets and 6,000 personnel.  DARPA's plan is to convert conventional aircraft into flying aircraft carriers that deploy squads of Gremlins  against enemy targets.  The unmanned swarming drones would do surveillance, swarm and surround enemy forces and engage in combat.  Once the mission is accomplished, the carriers would collect the drones in pods dangling from the aircraft and bring them back to home base.  DARPA wants the drones to be ready for their next mission within 24 hours.  This may sound like science fiction, but the Gremlins and their flying carriers are under development.  Testing has already begun.