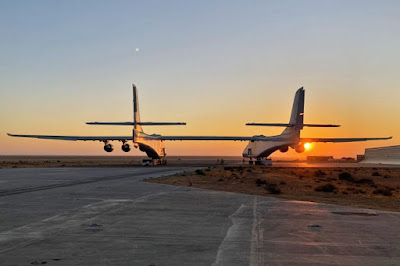 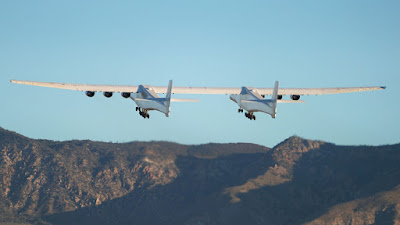 Huge Aircraft Designed to Carry Hypersonic Vehicles for the Pentagon

Stratolaunch, the aerospace company founded by the late co-founder of Microsoft Paul Allen, has successfully test flown its huge airplane, Roc, for the second time.  The double fuselage carrier plane is the world's largest aircraft by wingspan.  The wingspan is 385 feet, which is more than double that of a 747 aircraft.

Roc is powered by six engines.  In the test flight, it reached a peak altitude of 2.6 miles over the Mojave Desert.  The flight lasted 3 hours, 14 minutes and was flawless.  The test demonstrated how the plane handles cabin pressurization and new hardware upgrades.

Roc is designed to carry Stratolaunch's fully autonomous and reusable hypersonic vehicle, the Talon A.  The Talon A is designed to be a hypersonic test vehicle for the US Pentagon.  Talon A is a rocket powered, jet shaped aircraft that is 28 feet long and 14 feet wide.  When launched from Roc, Talon A will ignite its rocket engine and soar into the atmosphere at hypersonic speeds for a minute of hypersonic testing.  The technology is awesome.  Once the test mission is completed, Talon A will fly back to Earth for an autonomous landing on a regular runway.

Roc will continue to fly higher and faster for the next year in a series of test flights.  It is expected to launch Talon A by the second half of 2022.  The vision for all of this breakthrough and innovative aviation technology was that of Paul Allen, who died in October 2018.  New ownership is now carrying on his vision.