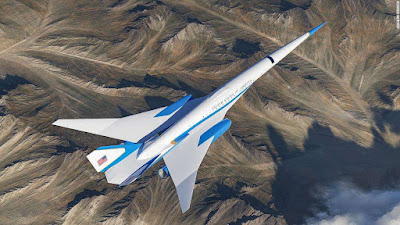 Traveling Close to Twice the Speed of Sound

California startup Exosonic is working with the US Air Force to develop a supersonic jet to carry the President of the United States.  It's a supersonic version of Air Force One.  Exosonic has secured a contract with the Presidential and Executive Airlift Directorate (PE) to develop its concept for a Mach 1.8 twin engine SST jet aircraft with a low sonic boom.

The Exosonic SST is a luxurious business jet for the President and his entourage.  It has 31 passenger seats, private suites for work and rest and leather, quartz and oak fittings.  The vehicle cruises at twice the speed of current aircraft or 1,381 mph.

The SST Air Force One is a spinoff from Exosonic's 70 seat commercial SST concept.  The Presidential version is expected to take to the skies in the mid-2030's.  Exosonic says the SST has brand new technologies not yet available in commercial aircraft today.  It has a 5,000 nautical mile range and with its advanced technologies it should be able to fly at supersonic speeds over land with a very low boom. Exosonic is a firm believer that the future of accelerated passenger travel globally will be led by low boom supersonic air travel, including for the President of the United States.