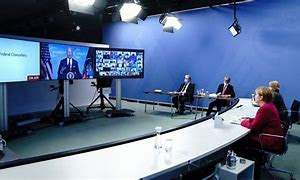 At the White House Virtual Climate Summit, President Joe Biden pledged to cut US greenhouse gas emissions in half by 2030.  The pledge will require massive changes and breakthrough renewable energy innovations for the US energy and transportation industries. President Biden says it is absolutely necessary and doable.  Biden made the pledge before more than 40 government leaders from around the world at his virtual, 2 day Leaders Summit on Climate, designed to demonstrate that the US is once again a strong force in the fight against Climate Change.  The previous Administration scoffed at Climate Change, withdrew from the Paris Accords and derailed efforts to fight global warming.  One of President Biden's first acts as President was to rejoin the Paris Climate Accords and declare war on Climate Change.

President Biden says the 2030 goal of cutting US carbon emissions in half will go a long way to achieving his 2050 goal of net zero emissions for the US.  The Biden Administration sees multiple paths to cutting emissions in half by 2030.  For starters, President Biden and his environmental team want the US power industry to be carbon free by 2035.  He wants to achieve a seismic shifting of the US energy sector to renewable energy and away from oil, other fossil fuels and coal.

Many Republicans in the US Congress plan to fight the Biden Administration plan to shift the US energy industry to renewable energy. US Senator John Barrasso (R-Wyoming) says cutting emissions in half by 2030 will put the US at a global competitive disadvantage.  President Biden argues it will create new clean energy jobs, build a healthier society and build competitive advantages for the US over China.  China is currently the largest producer of solar panels, wind turbines and electric vehicles.  These forms of clean, green energy would receive major financial support from the Biden Administration to expand technological innovation and development.

A number of global leaders, including the UK's Boris Johnson, are applauding the US initiatives.  Canadian Prime Minister Justin Trudeau announced that Canada will cut carbon emissions by 40% to 45% by 2030, a significant increase over the previous 30% target.  Japan Prime Minister Yoshihide promised to cut emissions 46% from the 2013 level.  The world's two biggest polluters - China and India - did not outline any new emissions targets.

For a comprehensive look at Climate Change, go to https://read.amazon.com/kp/embed?asin=B08HKM38V7&preview=newtab&linkCode=kpe&ref_=cm_sw_r_kb_dp_B3RE0KYTA99DNB62RXD5