World Aviation History is Made 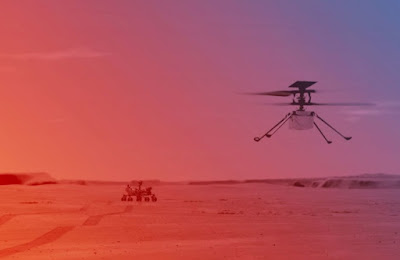 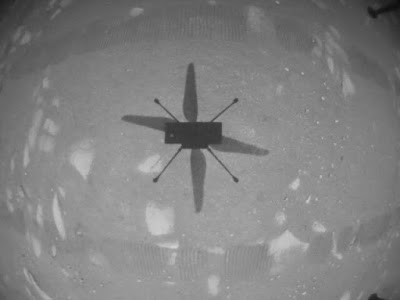 NASA's Ingenuity Mars helicopter has succeeded in achieving the first powered, controlled flight on another planet.  It used its navigation camera, which autonomously tracks the ground beneath Ingenuity during flight, to take its first black and white image from the air.  The small rotocraft has made world history with its first flight.  It is part of a long series of NASA achievements that were thought to be technologically impossible.

Ingenuity is solar-powered.  During its first flight, it reached a height of ten feet and hovered steadily for thirty seconds before landing smoothly back on Mars after 39.1 seconds of flight.  The flight test was totally autonomous.  Because of Mars' nearly 200 million mile distance from Earth, NASA can not control Ingenuity with a joystick.  Ingenuity's flight was powered and piloted by onboard guidance, navigation and control systems, running algorithms created by the Jet Propulsion Laboratory (JPL).

Series of Firsts in Space

NASA and Ingenuity are achieving a series of firsts in space. It is the world's first helicopter to land on Mars after being dropped out of its mother ship Perseverance Rover.  The final drop was 4 inches and Ingenuity's legs fully deployed. Since the landing on April 4, NASA has been testing Ingenuity's systems and endurance for the harsh conditions on Mars. The technology has been and continues to perform flawlessly.

Ingenuity is a technological marvel.  It weighs just 4 pounds and unfolds like a butterfly.  The vehicle is solar powered and relies on a rechargeable battery to power an internal heater to stay warm during the harshly cold Martian nights that can go down to -130 degrees F.  The helicopter interior needs to be about 45 degrees F to preserve the sensitive electronics onboard.

Ingenuity is a $85 million drone designed to test new technologies for future trips to other planets. Some of the technologies will have application to aviation here on Earth. The tiny rotocraft has two cameras to document its flights.  There are a series of flights scheduled over a 31 day period.  Each successive flight will be longer in length. The flight zone consists of 90 miles over Mar's Jezero Crater, a place that many scientists believe once supported ancient forms of life.  The maximum flight altitude for Ingenuity is 16.5 feet.  The helicopter's four rotor blades are capable of spinning up to 2,537 revolutions per minute.  NASA will continue to monitor how Ingenuity and its many advanced electronics, cameras and sensors are withstanding the test flights and the brutal cold of Mars at night.