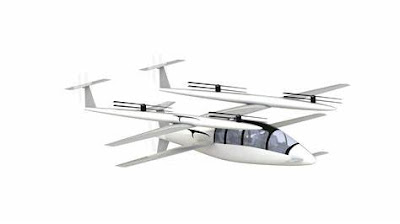 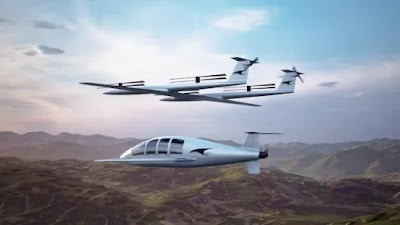 No Need For an Airport
Los Angeles-based Talyn Air has designed a unique e-VTOL, an electric vertical takeoff and landing vehicle.  The vehicle is a concept that flies like a plane but launches and lands with the assistance of a large drone. The unmanned drone flies the e-VTOL to its flight level where it releases the e-VTOL once its rotors reach a flight sustaining speed. The drone returns to its base to be recharged for another takeoff or landing.  Talyn Air says this system is so efficient it can travel three to five times farther than most other electric planes.
Rocket Science
Talyn Air was co-founded by two astronauts, Jamie Gull and Evan Mucasey, who both worked on Crew Dragon and the Falcon 9 rocket at SpaceX.  Both of those space vehicles are reusable.  The Talyn system works like a rocket separating the first stage and transitioning to the second stage for forward flight.  It has also been described as a drone "tug boat" pulling an electric aircraft "cargo vessel" and releasing it into the open skies.
Brand New Aviation Technology
The Talyn aircraft is all electric.  According to the company, it can travel 3 to 5 times farther than most other electric planes because of its lower mass, higher efficiency and greater aerodynamics.  As it is launched at flight altitude by the drone, the e-VTOL saves all of its battery power for actual flight.  It can fly five passengers at 200 mph for 300 miles.
Cost & Travel Time Savings
The Talyn e-VTOL has a number of cost savings features. It doesn't require the tilt rotor systems like other e-VTOLS.  It is cheaper to operate because less energy is used during flight.  And since it doesn't require an airport, commuting time is greatly reduced.  The company says a flight between Boston and New York City will be four times faster than a traditional commuter shuttle flight.  The Talyn is a concept vehicle and the biggest challenges now facing the co-founders include making the in-air separation and docking of the vehicles bullet proof realities.
#California #drone #drone launch system #e-VtOLs #electric plane #Los Angeles #news #Talyn Air