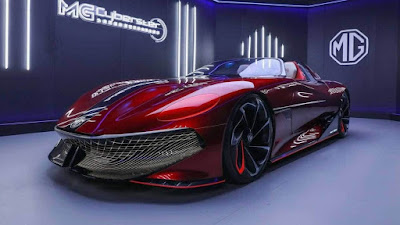 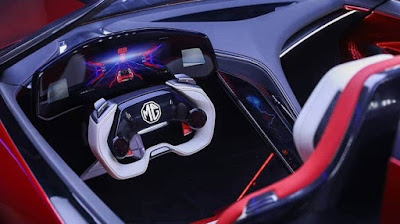 The legendary sports car company MG was founded in the 1920's in Oxford, England. It enjoyed a long history of creating iconic MG, 2 seat sports cars. It is now China owned and China based, acquired a few years ago by SAIC Motors.  The new MG has a fabulous concept car the Cyberster.  It's an all electric sports car that was recently introduced at the Shanghai 2021 Motor Show.  MG just announced the vehicle is going from concept and into production.  MG calls it the "world's first purely electric e-sports cockpit".  The design of this electric vehicle is sleek, futuristic and highly styled with a wide grill that is a throwback to the original MGB as are the round headlights that open like eyes when the car is turned on.  It is truly an iconic, all electric sports car.

The Cyberster will offer a driving range of 500 miles and can accelerate to 62 mph in less than three seconds.  The cockpit contains a thin strip of all digital controls on the center console, a digital wrap around instrument/gauge cluster and a Formula One style steering wheel.  It is designed to compete against Tesla's Roadster 2.0.  The Roadster 2.0 is expected to hit 60 mph in 2.1 seconds and has a promised range of 621 miles.  Roadster prices start at $200,000.  The Cyberster is expected to be priced below that.

The Cyberster has wing doors that will be equipped with handles and side mirrors and the vehicle has massive wheels.  There are laser belt strips along the sides of the car and Union Jack shaped taillights, again paying homage to the British heritage of this brand new electric sportscar.  Also, MG says it has created the industry's first super-car gaming cockpit, in partnership with Chinese e-sports company Bilibili gaming with "themed sound and lighting design and other features", targeted to appeal to young, Gen Z users of the Cyberster.

For a comprehensive look at the future of travel, go to https://read.amazon.com/kp/embed?asin=B08YTGFCG2&preview=newtab&linkCode=kpe&ref_=cm_sw_r_kb_dp_62W4FEPV13NY329WHCQN