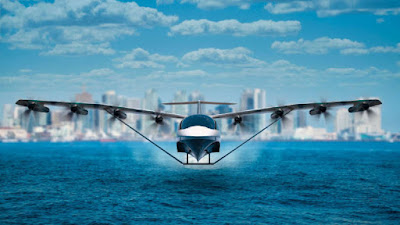 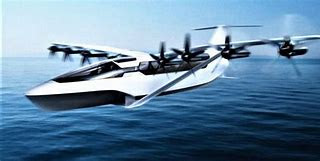 Would you love to get from Boston to Nantucket, or from any major city to a beautiful nearby coastal location, in record time?  There's a new electric aircraft, that's part plane and boat, that can do it.  It's called the Regent Seaglider.  The EV taxis across the water from a dock and then takes off and lands on open water, and then taxis back to the dock to discharge passengers.  This EV is similar to a Seaplane but it is much more technologically sophisticated.  The Seaglider is the creation of two MIT aerospace engineers, Billy Thalheimer and Mike Klinker who both worked at Aurora Flight Services and Boeing , before founding their Boston based startup Regent. Regent Seaglider now has nearly $500 million in orders for this unique EV and billionaire Mark Cuban as a founding backer.  The Seaglider is specifically designed for fast commuting services between cities and coastal resort areas.

The e-plane has zero emissions, a 180 mile range on a single charge and travels at 145 to 180 mph.  The design is highly innovative.  Once it lands on the water, it converts into a boat to taxi to a dock.  The vehicle has great versatility.  It doesn't need a fixed takeoff and landing location and needs no infrastructure as it can taxi to a dock to pickup and drop off passengers.  With eight electric engines, Regent says the Seaglider is 6-times faster than a conventional ferry.

EV That Transitions Between Travel Modes

Seaglider transitions between multiple modes of travel.  When it taxis away with passengers from a dock, it runs on foils, which keep the fuselage slightly above the water for a more comfortable ride above the waves, while it travels at 20 to 45 mph.  When the vehicle reaches open water, it takes off and flies at 145-180 mph.  It doesn't fly at a high altitude but stay right above the water like a hovercraft, using the "ground effect" or a cushion of air to stay about a wingspan above the water surface.  Regent says that Seaglider runs at half the operating cost of a traditional aircraft.  Commercial airlines and ferry companies are placing orders for it.  It is expected to start carrying passengers in 2025.  For a comprehensive look at the future of flying travel, go to  https://read.amazon.com/kp/embed?asin=B093J89VF5&preview=newtab&linkCode=kpe&ref_=cm_sw_r_kb_dp_QFR968H38SAGECWJ3CKG