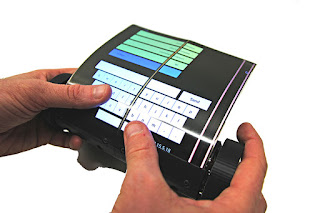 MagicScroll - a Rollable, Scrollable Screen
It's called MagicScroll. The device was created by computer engineers in Canada and it's a first. It's essentially a high resolution display.  It can be rolled and unrolled around a 3D printed cylinder that has the device's computerized inner workings.  The developers were inspired by and created it based on ancient Egyptian scrolls.

Canada Made for Many Uses like a Phone
MagicScroll  was developed by researchers at Queens University Canada.  The device's light weight and cylindrical body make it easy to hold in one hand.  Importantly when rolled up, it fits into your pocket and can be used as a phone, dictation device or pointing device.   2 rotary wheels at either end of the cylinder allow the users to scroll thru information on the touch screen.

Goal: Any Device Can Be a Screen
Here's the ultimate point of the research.  The researchers want to bring the MagicScroll device down onto something like a pen to demonstrate that virtually anything can be a screen with access to the internet.
#MagicScroll #touchscreen #Queens University #rollable #tablet Egyptian scrolls scrollable