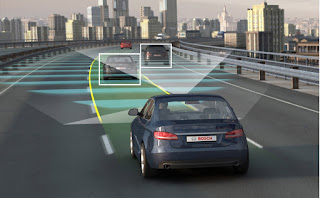 Stanford University scientists have just developed an artificial intelligence camera that could be used to help robot cars avoid obstacles and better navigate the roads.

Image Recognition System
The image recognition technology underlying this breakthrough relies on artificial intelligence.  The computers teach themselves to recognize objects like a pedestrian crossing the street, a dog running across a road and stopped cars.

Stanford System "Lightning Fast"
The problem has been the computers currently running AI algorithms are too big and slow for applications like the rapid decision making needed for autonomous cars or hand-held medical devices.  The Stanford team combined 2 types of computers to create a faster and less energy intensive image process.  They say it works lightning fast and circumvents millions of calculations.

Next Steps
The system has been successfully tested by simulation and in the real world.  It accurately identifies dogs, people, cats, cars and much more.  The Stanford team's focus now is to miniaturize the system in order to put it aboard autonomous cars to help them avoid accidents.
#AI cameras #algorithms #autonomous cars #Standford AI