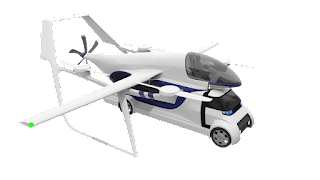 Plane and Ground Vehicle
Terrafugia invented the world's 1st FAA and NTSB approved flying car, The Transition.  The TF-2 is a next generation concept design they're working on now.  It promises door to door service for 4 passengers and their luggage.  There's a detachable pod. It goes from a flight vehicle to a ground vehicle in 2 minutes.

Going to Market
The TF-2 will enter the market as a hybrid electric aircraft that will be flown by a pilot.  But as the technology they're working on matures, the plan is to go all electric and with autonomous systems.  At the moment the company says the maximum cruising speed is 240 km/hr.  The cost per hour of flight is $400.  No time frame for launch has been announced.

China, Sweden & US
US based Terrafugia has a deep pockets parent company Geely of China and its "sister" company Volvo of Sweden is also owned by Geely.  As I blogged yesterday, the 3 are launching The Transition in 2019.
#electric plane #Geely #ground vehicle #Terrafugia #TF-2 #Transition