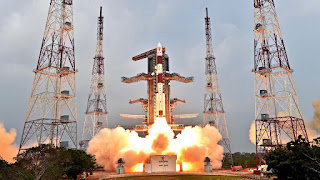 India's PSLV rocket is about to launch into space 2 British commercial satellites. Blastoff is scheduled for today at Satish Dhawan Space Center in Sriharikota, India.  It underscores the growing importance of India in space for both exploration and commercialization.