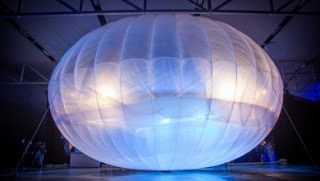 Flying Wind Currents at 90,000 Feet
The U.S. Defense Department's Advanced Research Projects Agency DARPA is going back into stratospheric balloon research and development.  After a hiatus of several years, it's launched a project to demonstrate that balloons, lighter than air, can drift between wind layers and go into the stratosphere for days and weeks at a time.  The balloons can reach altitudes up to 90,000 feet.

Potential Uses:  Delivering the Internet to Remote Locations - A Google Idea
DARPA is working with Raven Aerospace on the project.  Raven has developed super pressurized balloons capable of long duration.  The fact that DARPA has gotten back into developing this technology tells you the capabilities are very promising. The balloons could obviously be used for surveillance and intelligence.  And, there's an intriguing idea that Google is separately working on.  Using the high altitude balloons to deliver the internet to remote parts of the world.