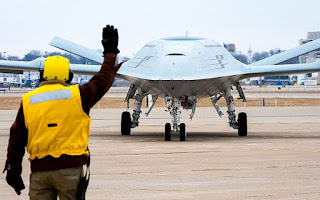 The US Navy just awarded Boeing an initial $805 million contract to build Stingray MQ-25A drones.  The Stingray's mission is to refuel aircraft in mid-air.  The Navy wants a Stingray flying by 2021 and 4 Stingrays in service by 2024.  It plans on deploying a total squadron of 72 with a price-tag of $13 billion..

Carrier-Based and Unmanned
These are the Navy's first, carrier based, unmanned aerial refueling tankers.  They'll launch from ships and refuel Navy fighter jets in the air. They'll significantly extend the range of the carrier air wing's missions.  Currently, the Navy's using F/A-18 combat jets for refueling.

Competitive Advantages
This was a 3-way contest for the drone contract.  Boeing beat out Lockheed and General Atomic.  Analysts say the winner Boeing could have an advantage in developing future unmanned systems for the military.
#Boeing #drone #refueling #Stingray #US Navy