SpaceX Successful Launch of Another Batch of 60 Satellites 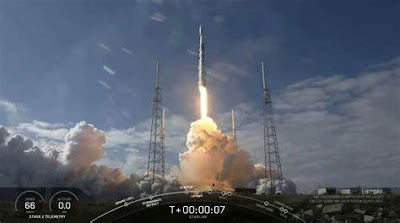 Early this morning, at Cape Canaveral, Florida, SpaceX launched another 60 Starlink internet satellites.  That brings the total in the Starlink internet constellation to more than 1200.  The system promises to provide inexpensive broadband services to the globe and particularly to remote and underserved areas.  SpaceX CEO Elon Musk wants to have a threshold of 1,440 Starlink satellites deployed in low Earth orbit to deliver optimum broadband services.  He has also petitioned the Federal Communications Commission for permission to launch tens of thousands of more satellites.  Musk has the internet service in beta-testing along stretches of the US-Canadian border and in Germany, the UK and New Zealand. Customers can also sign up on line for future service when it becomes available in their location.  Musk also wants to expand the internet service to moving vehicles including aircraft, ships, semi-trucks and RVs.

The satellites were carried by a two-stage Falcon 9 booster rocket.  The rocket's reusable first stage, 8&1/2 minutes after launch landed safely on one of SpaceX's drone ships in the Atlantic Ocean about 400 miles from Cape Canaveral.  This is very impressive, reusable space technology.  It was the sixth time that the Falcon 9 first stage launched into space and landed safely on a drone platform.  Interestingly CEO Musk has a long term goal to move onto rockets similar to aircraft that can takeoff, land and refuel with very short turnarounds of less then 24 hours.