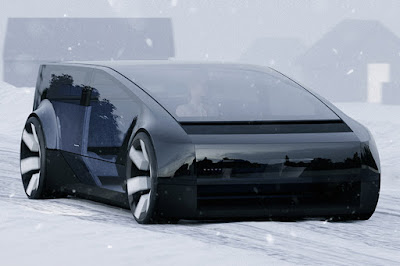 Driving Into the Future

The autonomous concept car is called the Volvo Think Inside the Box.  It's a very edgy concept car designed for Volvo by UK creative designer Roman Zenin while doing his thesis at a University in Germany.  The vehicle's interior is the big differentiator.  The designer has created a luxurious lounge zone that can be used for office work, resting or leisure time and entertainment with the family while travelling.  It is a fascinating example of driving into the future in an autonomous lounge car.

A Living Room On Wheels

This vehicle is like a living room on wheels.  The two-seat version comes with big, plush sofa-like seating.  There is a huge entertainment display where the windshield is that allows the travelers to enjoy their favorite entertainment as they are driven to their destination.   A lever provides easy access to functions like increasing the audio system's volume or changing the temperature controls.  At the touch of a button, the huge glass window can be turned to private mode to cut out distractions and take a snooze. Roman Zenin's concept car for Volvo is a look at autonomous driving in the future.